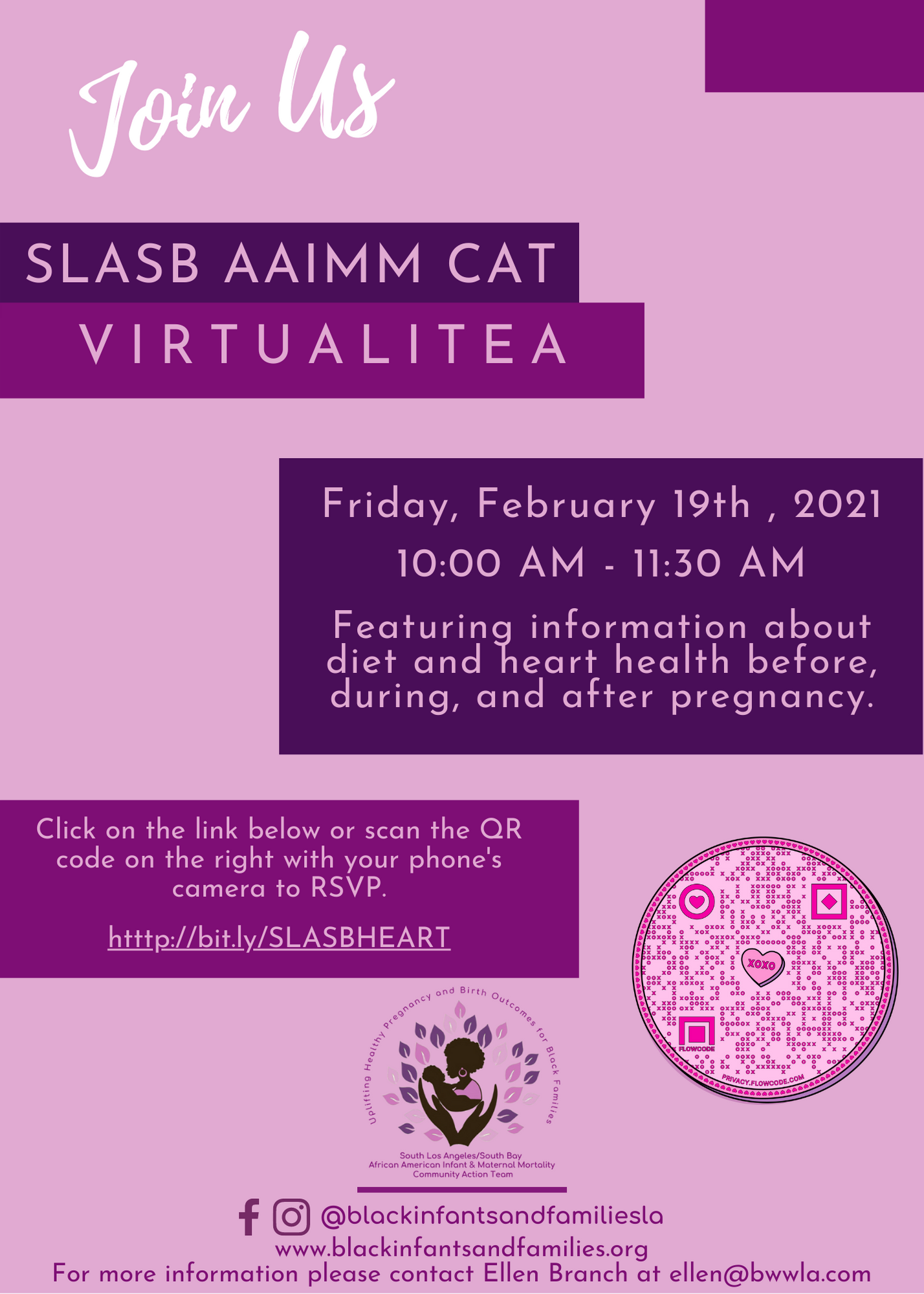 On Friday, February 19, a free VirtualiTEA: Diet & Heart Health event organized by the South LA/South Bay African American Infant and Maternal Mortality Community Action Team brought together a group of over 40 public health and birth workers and new and expectant parents to discuss the importance of holistic health for Black women during all phases of pregnancy and post-birth, from preconception to the postnatal period (one  year after baby’s birth). The live Zoom featured presentations by speakers Nurse Jacqueline Williams, founder of Women’s Global Health Promotion and CEO of Aspire Nursing Consultants, Inc., and Keisha Davis, Doula/Midwife Associate.

Nurse Williams kicked off the event by emphasizing the importance of heart health during pregnancy, noting the strain that pregnancy can cause on the heart. Pre-postpartum care is critical, Nurse Jackie shared, mentioning that some rare forms of heart failure, Peripartum Cardiomyopathy (PPCM) specifically, can occur after pregnancy.

She also urged the importance of advocating for oneself during pregnancy. “If that doctor is not listening to you, you may want to find another doctor who will listen,” Nurse Williams said, reminding the women, “I deserve to be listened to. This is for the benefit of my baby and my health.”

Davis spoke about nutrition and prioritizing it as part of one’s lifestyle even before conception. “Everyone should be preparing,” she said. “Preconception is vital. Placenta is what sustains pregnancy and provides nutrition and oxygenation for the fetus. Preparing your womb is important and we do that by making sure you are healthy.”

Moments into her presentation, Davis was interrupted by a text from a mom in labor and the chat blew up:

“Yes!!! Babies come on their own time. Our work in action--love this!” Exclaimed another.

Without skipping a beat, Davis returned her attention to the event once she knew that the mom was safely on her way home from the hospital. She continued by noting that,  “nutrition is not a one-size-fits-all,” and that following an individualized nutrition plan from preconception throughout pregnancy—including healthy snacks to maintain energy during labor—should be an important part of one’s overall wellness strategy.

“Make sure your womb is healthy,” cautioned Davis. “You want to be sure you’re aligning everything. It’s not just about eating healthy. You want to prepare your body for this new life force.”

Throughout the event, the chat area was lively and supportive, with tips shared on everything from how to add trace minerals to water, vegan recipes, eating for one’s blood type, and the superfood du jour: sea moss. “This sea moss has taken over the chat!” Laughed moderator Payshia Edwards, AAIMM Community Outreach and Engagement Workgroup Co-Chair. Black-owned Nappily Naturals & Apothecary, a health and beauty shop in South Los Angeles, received a lot of love and a group of ladies even planned an excursion to Leimert Park to stock up on nutritional supplies.

Closing out the event, Adjoa Jones, Co-Lead South L.A./South Bay AAIMM Community Action Team, continued the good vibes and community spirit by leading the group of attendees in the recitation of uplifting affirmations:

“This was so informative. Thank you!” Commented attendee Summer McBride.

In case you missed it, February’s VirtualiTEA: Diet & Heart Health is available for streaming on @blackinfantsandfamilies Facebook’s page at https://bit.ly/3dC8hYf.

“Without healthy Black babies and healthy Black mothers, we can’t have a healthy culture,” commented Rayshell Chambers, COO of Painted Brain, as the Celebrating Black Families: Persevering Through...And the Beat Goes On event kicked off on Friday, February 19. Presented by The San Gabriel Valley African American Infant and Maternal Mortality Community Action Team and The Black Mental Health Task Force, the virtual celebration of Black History Month was all about that very thing: creating (and sustaining) a healthy Black culture.

The event’s central theme, perseverance, was illustrated through the idea of healing from historical trauma collectively as well as creating opportunities to thrive, specifically by creating a sense of real community punctuated by ancestral beats and rhythms. This began with sharing a video on the history of stepping and segued into interactive demonstrations and a panel of members of the Divine Nine (D9).

Throughout, the audience participated with lots of various emoji reactions and a lively, talkative comments section. Solidarity among sorors and frat brothers was shown in the chat as attendees shouted out their allegiances, “Phi Beta Sigma sends greetings to all,” commented one attendee. The event also had two raffles giving away $25 gift cards to various stores (Target, Amazon, to name a few) to people who registered before 3pm on the day of the event.

The “Divine 9,” as the group of nine collective Black Greek fraternities and sororities is known, was originally formed as a way to empower Black college students as they carved their paths in the world, thereby forging opportunities for the Black community as a whole. “We want to make sure that we have a seat at the table,” said panelist Mosi Odom, Zeta Phi Beta, noting that the Black Greeks were there for every pivotal moment in Civil Rights history.

The panel shared programs that the Divine Nine has participated in, including volunteership, fundraising, and donating to other organizations, like The March of Dimes. They also have youth organizations for children. “When you see (the) community, you see us at the front lines,” said Mosi Odom.

“To strengthen the family we must build a foundation again,” said Ken Barrow, Omega Psi Phi Fraternity. Barrow spoke about the way that the Divine Nine builds a sense of community, takes care of each other, and creates strong relationships. He tied in the importance of perseverance in maintaining those relationships—particularly as they relate to family. “With perseverance, you do something despite it being difficult,” Barrow said.

Next up was a live step show from Wayne Lyons, CEO of Empire for the Youth, and Gwendolyn Bush. Lyons began by quoting James Baldwin’s Notes of a Native Son. Then, with energetic enthusiasm, jumped in the background while Bush spoke, welcoming the audience to Greek life.

The performance set a joyous tone for the rest of the event, as it segued into a demonstration of the Chicago step by Terrance Jones. “It’s a dance form that can adapt to any style of music,” Jones said as he briefly broke down the history of Chicago Step and shared a video about the benefits of stepping.

“Stepping is beautiful,” commented attendee Raena Gransberry as the video played. “Couples gliding and dressed sharp.” Indeed, Jones noted, similar to the formation of Black Greek life, stepping was created as yet another way for Black folks to form a sense of community around a cultural touchstone. And from community, relationships form, families are made.

“This has brought families together,” Jones said. “It was our way to make memories by touching each other.”

Jones got everyone out of their (virtual) chairs to join in some moves. As he pushed his camera back, he revealed blue tape laid down to demonstrate, “dancing in the lane.”

“What a great mental health invention, both in the Black Greek system as well as for anyone else; the movement, the human connection, the solidarity…this can do so much (for) someone struggling but not yet able or willing to connect with more formal services,” commented Melinda Keily, BSN, RN, IBCLC.

The interactive segments continued with a drumming session and demonstration by Cedric Jones of Music Tree. Drumming on a Djembe, Jones gave mini lessons about the African roots of Cumbia, Kuku and Fanga rhythms, encouraging the audience to play along. After his presentation, Jones played the event out as a spoken word presentation expounded on the meaning of perseverance.

New for 2021! The Federal Earned Income Tax Credit (EITC) is now worth $6,660 * California's CalEITC has increased to $3,027 and is now available to who earned up to $30,000 * CalEITC recipients with a dependent under 6 years old may receive an additional $1,000 from the new Young Child Tax Credit!

The Fatherhood Consultant will:

Join the RHPC for their exciting Black History Month events - all month long!

Description: Please join us as we discuss maternal healthcare disparities, specifically morbidity and mortality. Experts Mashariki Kudumu and Wenonah Valentine will share their experiences in the field, what changes need to be made, and how medical students can contribute to making these changes.

Description: Please join us as we hear directly from patients who have experienced disparate maternal healthcare. This is an amazing opportunity to interact with patients, hear their lived experiences, and learn how we can work towards ending racism in healthcare. Our patient panelists are Heather Banks and her daughter, Jill.

Description: Please join us in a discussion of the documentary “The Naked Truth: Death by Delivery”. This documentary explores maternal healthcare in two vastly different areas of the US- rural Georgia and New York City. The experiences of women living in these areas describe the current state of maternal healthcare in America, the deathly consequences these disparities have for many African American women, and steps being taken to provide equal care.

Description: Each day during the week of February 22-26, we will be conducting interviews with Doulas via Instagram live (@uscrhpc) to educate our members about the history and importance of Doula practices, promote doula programs, and encourage faculty and students at our university to utilize this knowledge in their careers. 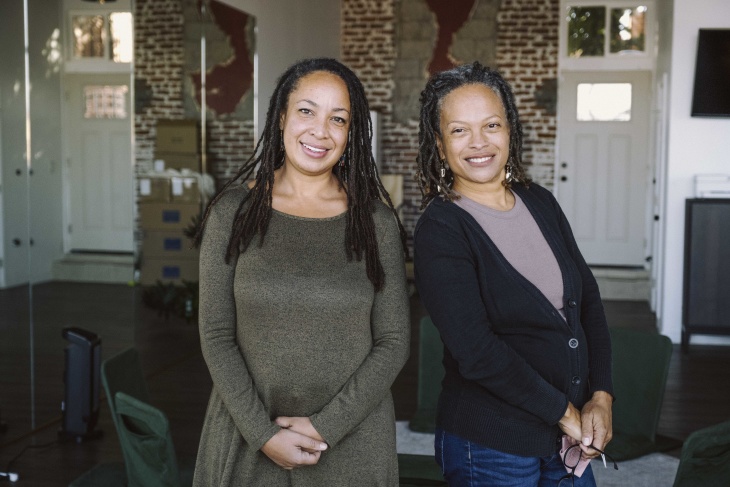 Nicole Hamad's infant son Amari was born at home with the help of midwives Kimberly Durdin and Allegra Hill in November.

"There are ways that you can labor so that you're not in excruciating pain and it worked," Hamad said. "Not once during my homebirth did I say that I want an epidural. I knew that I could do this."

It's an experience Durdin and Hill hope they can bring to more people with the opening of the Kindred Space LA birthing center — a unique birthing, education, and support facility owned and operated by Black midwives.

"Allegra and I haven't been comfortable just being like, 'Wow, that really sucks. All this terrible stuff is happening'," Durdin said. "We have literally pledged our lives at this moment to be a part of the solution."

EITC provides up to $10,000 in refunds for income-eligible families, primarily those with young dependents. This year, the California credit is now available to ITIN holders (those without a Social Security Number).

Research has shown that EITC is hugely beneficial in providing financial security to families and improves mental health and health outcomes, including reduced risk of infant mortality. 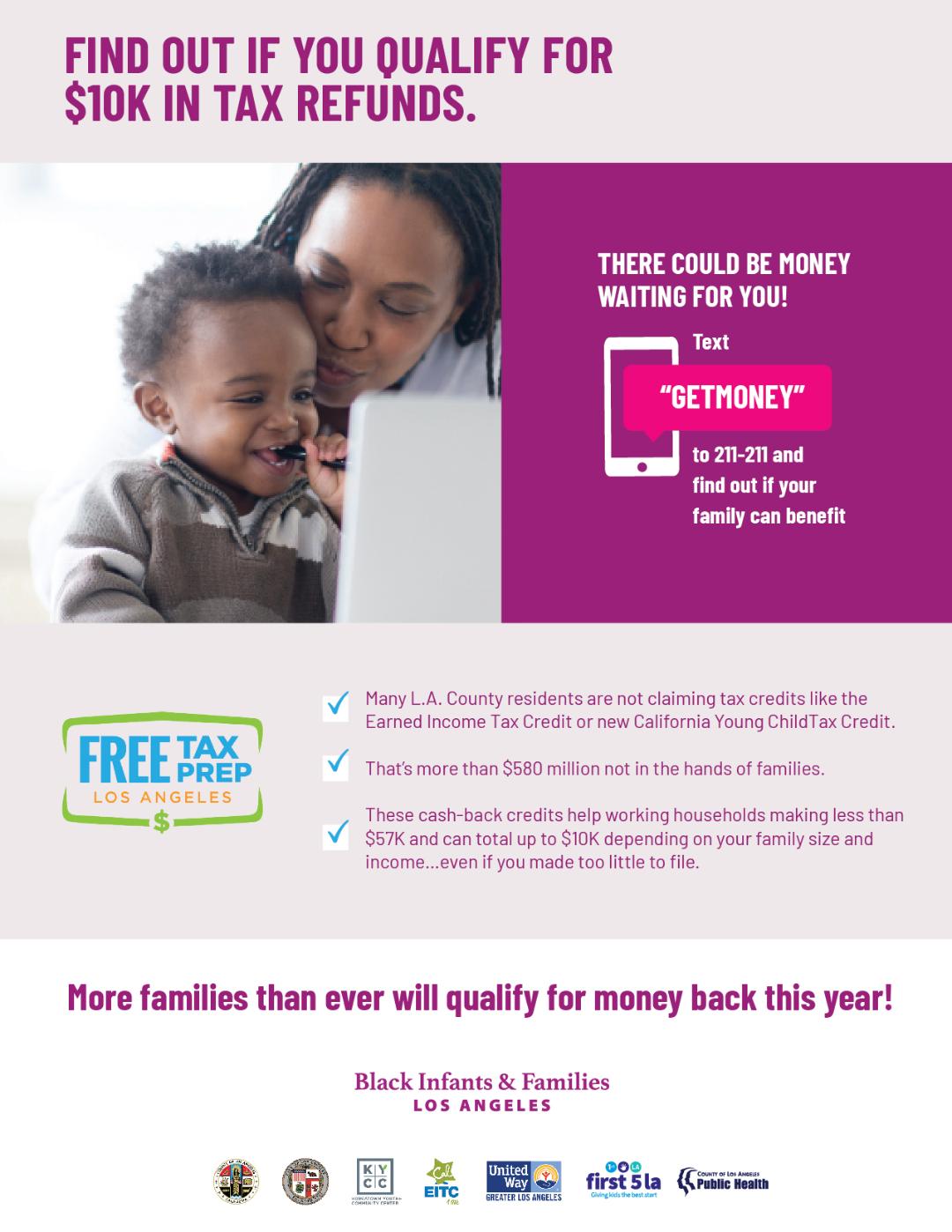 The informative series is for both clinical and community stakeholders and we hope the series will spark dialogue and actionable solutions to ensure healthy and joyous births for all.

Click here to register. You will receive a confirmation email with log-in instructions.

Click here to register. You will receive a confirmation email with log-in instructions.

The Richardson Review: The Official Newsletter for SLA/SB AAIMM CAT! 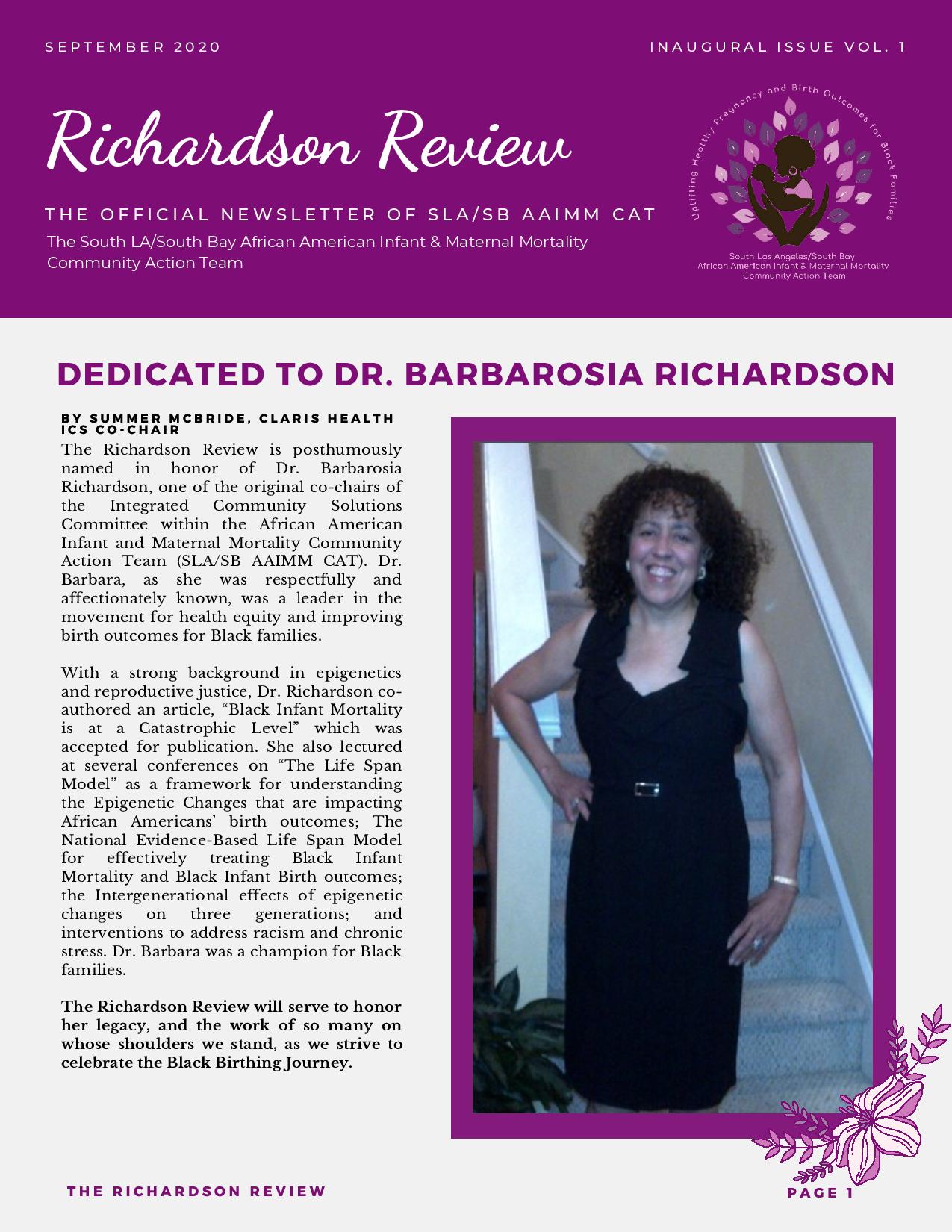 Adjoa Jones, Associate Director Whole Person Care-LA, and a SLA/SB AAIMM CAT lead, shared the inspiration about the newsletter. "I can’t express how proud I am of our team, who worked hard to put this edition together to honor our beloved Dr. Barbarosia Richardson. Dr. Richardson, who served as one of the original ICS co-chairs and was dedicated to improving the Black infant birth outcomes." Dr. Richardson who passed earlier this year, was a tremendous inspiration and leader on the CAT, known for her insight, positivity, and brilliant out-of-the-box wisdom in the work. "With tears running down my face right now, I can say not only did she show up but she showed out, with her soft-spoken self," Jones went on to share. "Dr. Barbara Richardson, we are missing you already. On behalf of the South Los Angeles/South Bay African American Infant and Maternal Mortality Community Action Planning Team, the Integrative Holistic Approaches Workgroup and the entire AAIMM Community, we can say Dr. Barbara was truly appreciated; her work and endeavors were INVALUABLE to us." 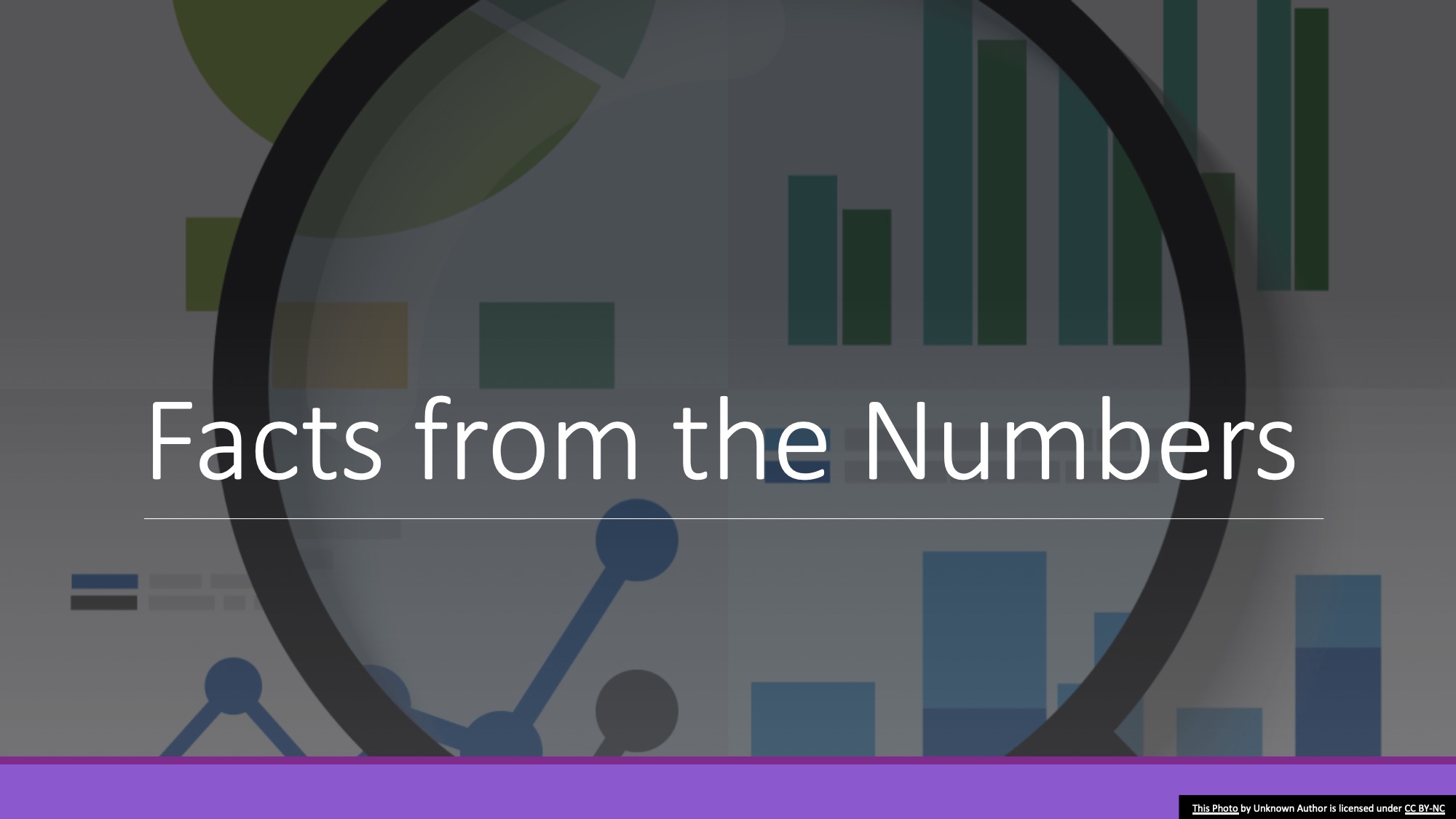 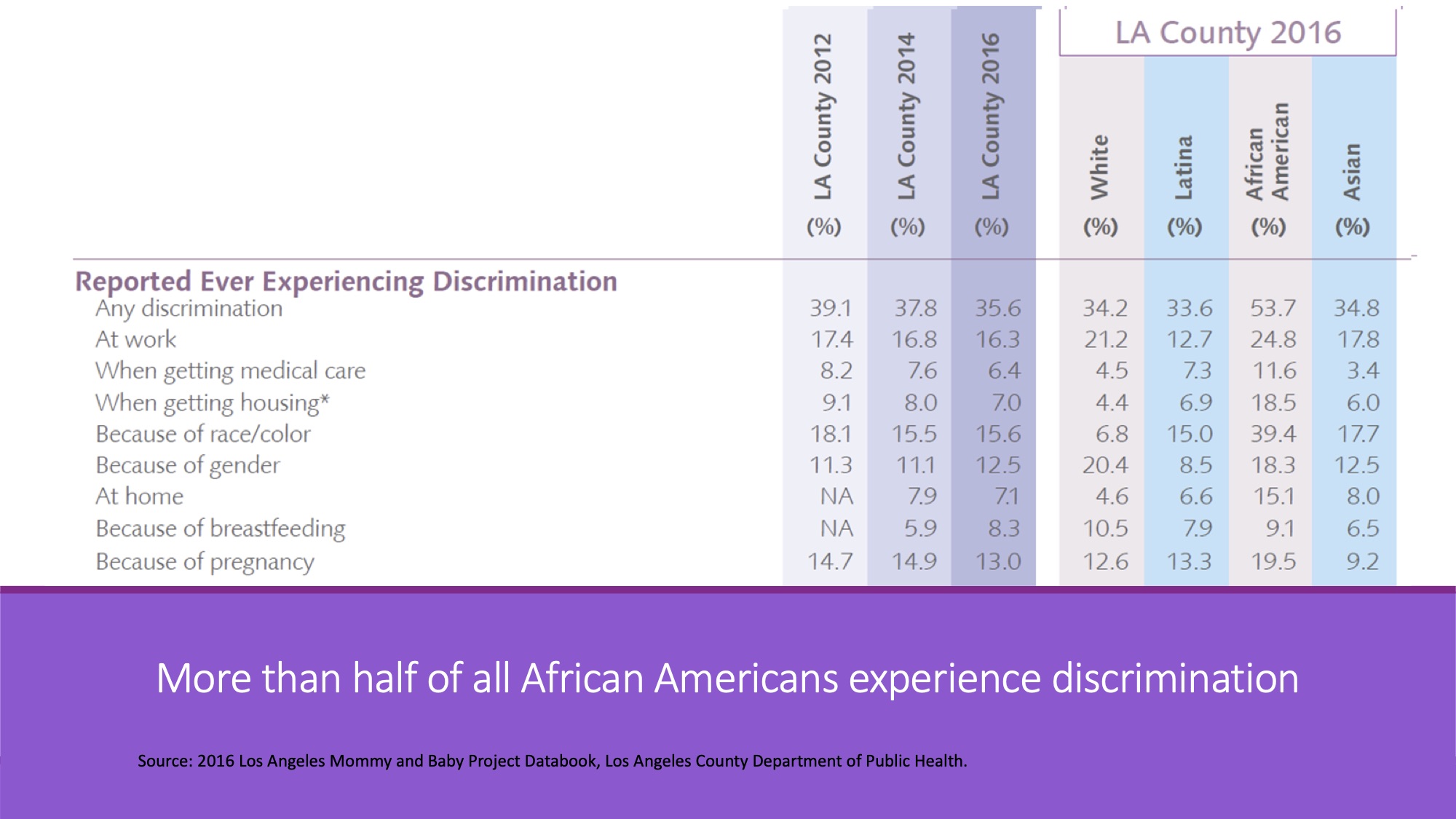 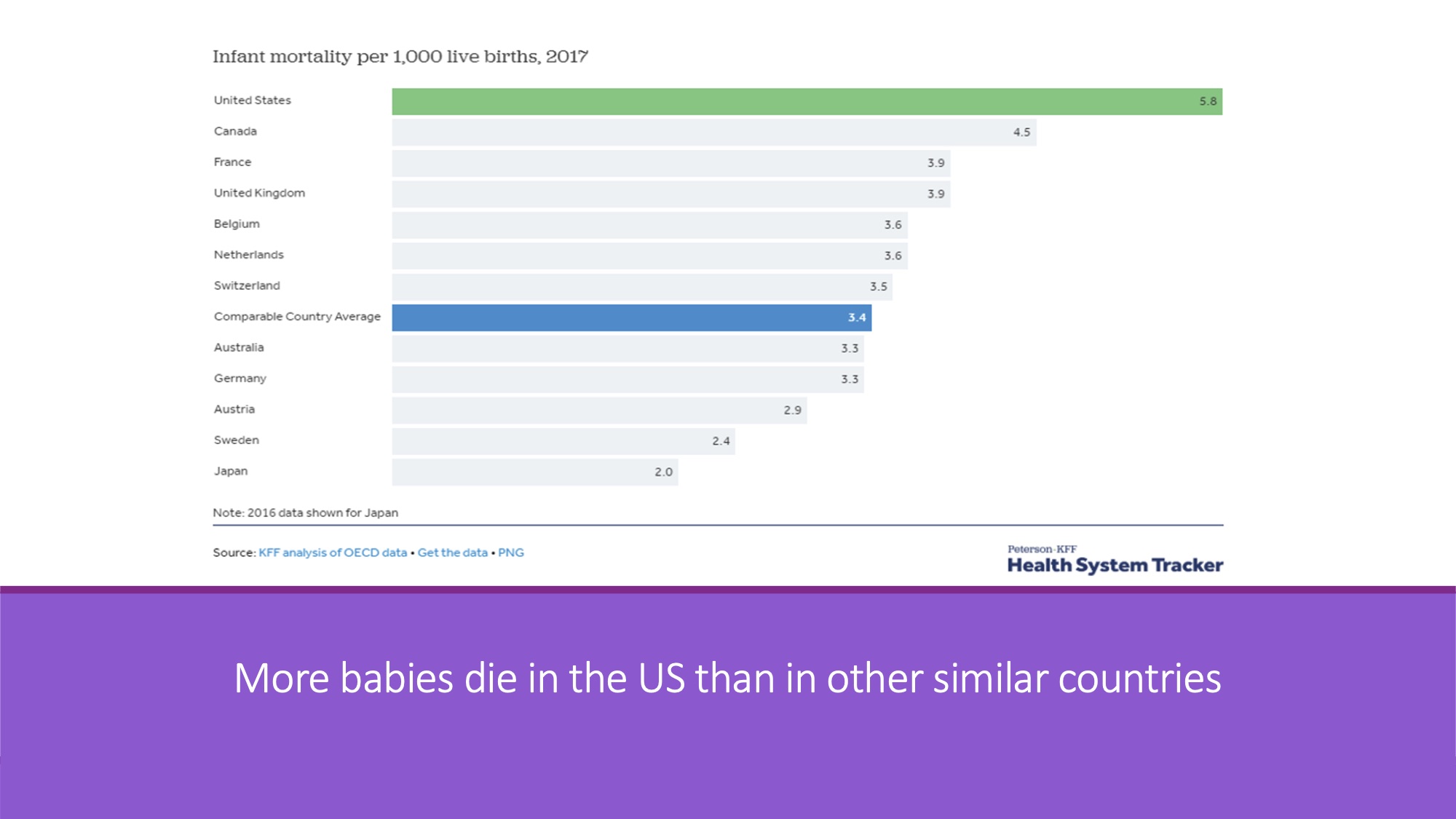 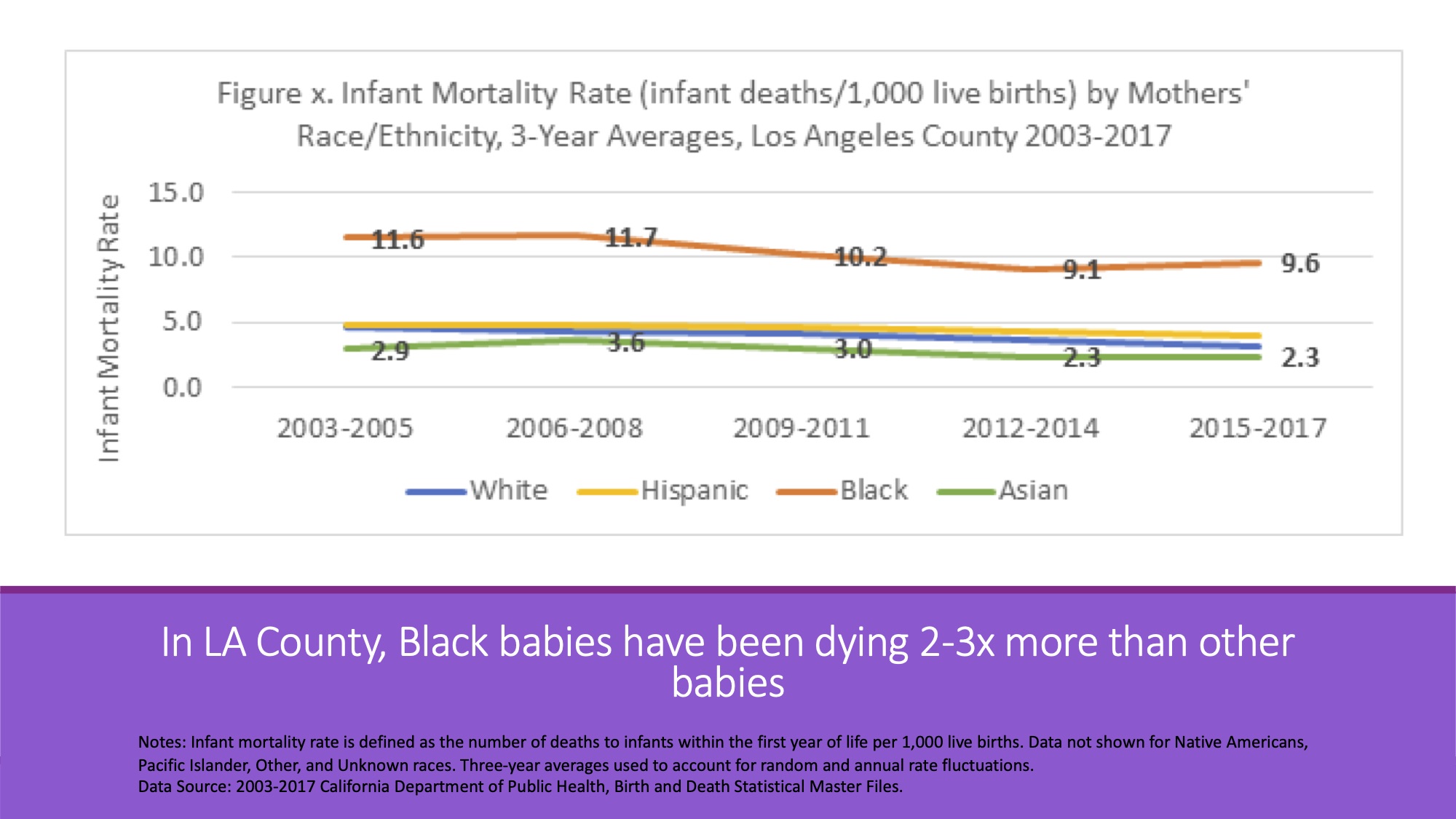 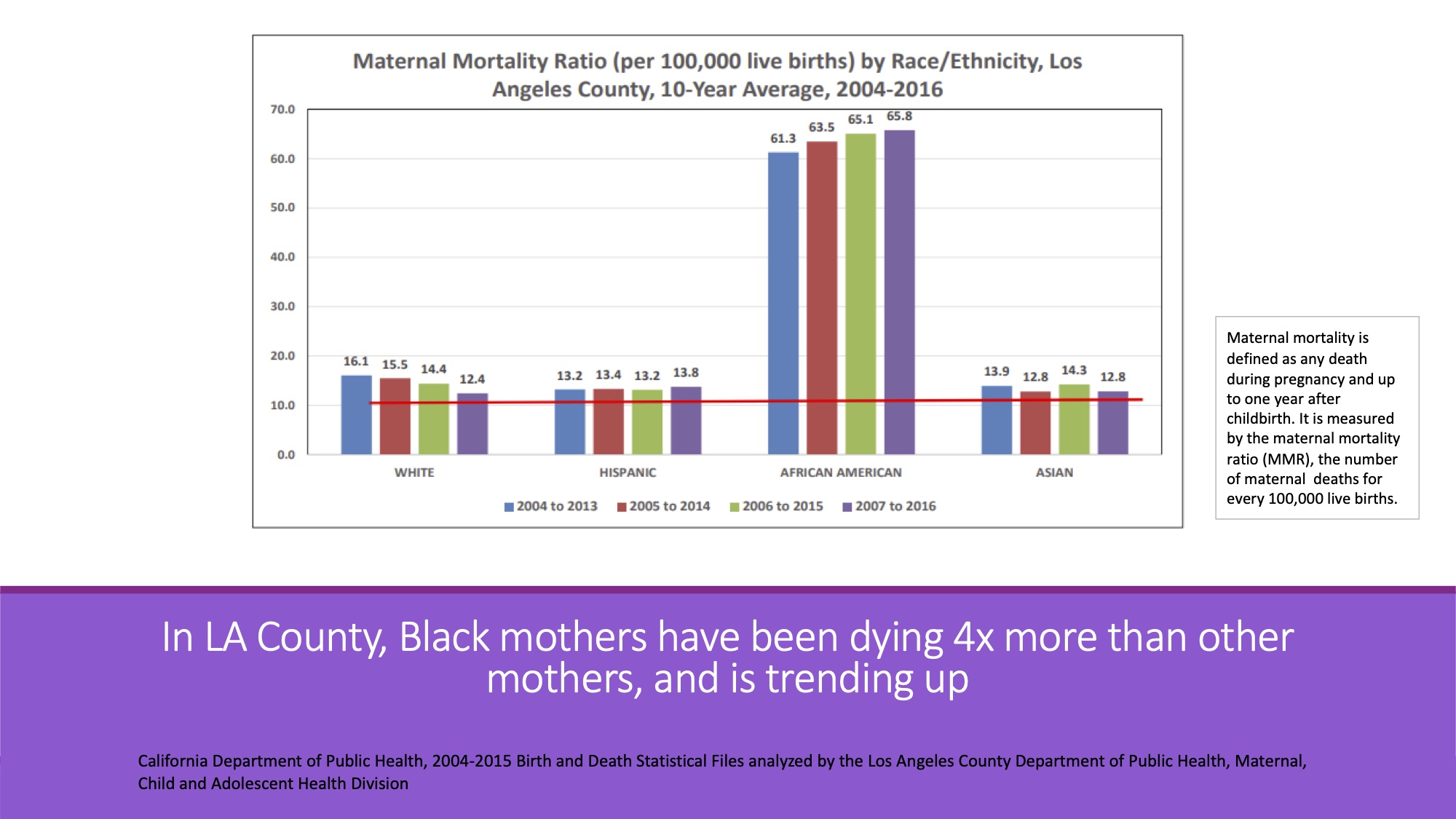 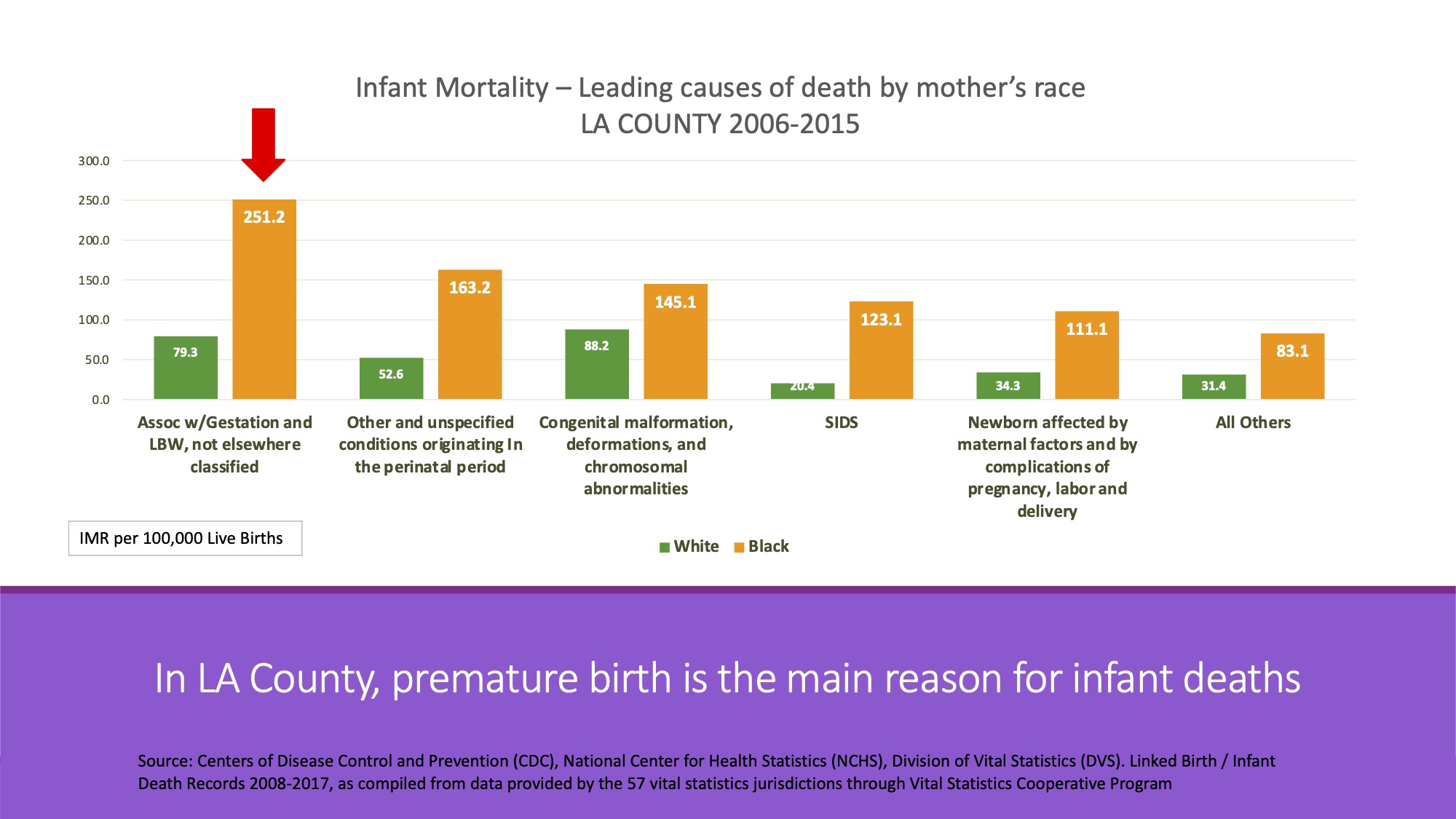 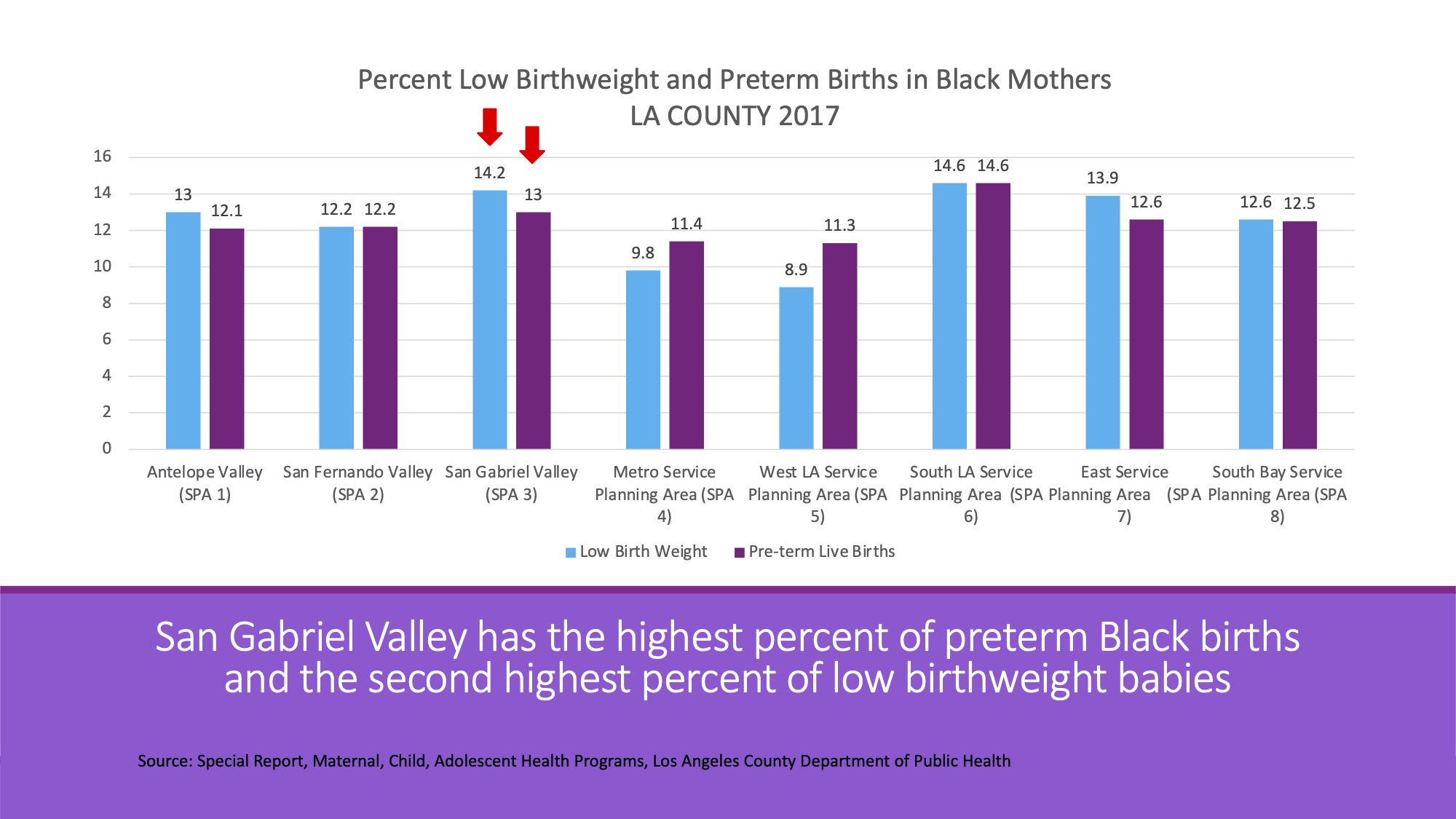 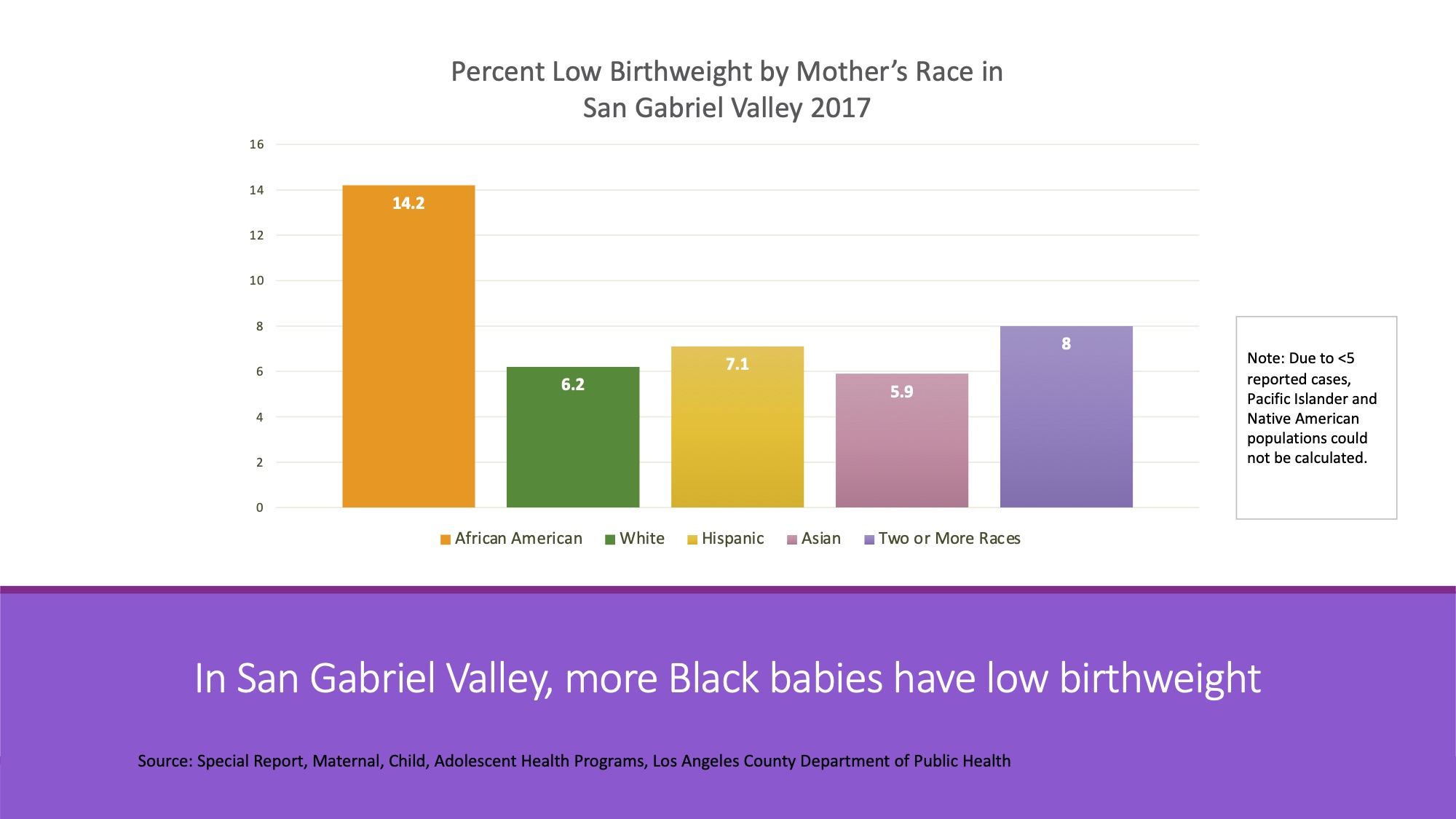 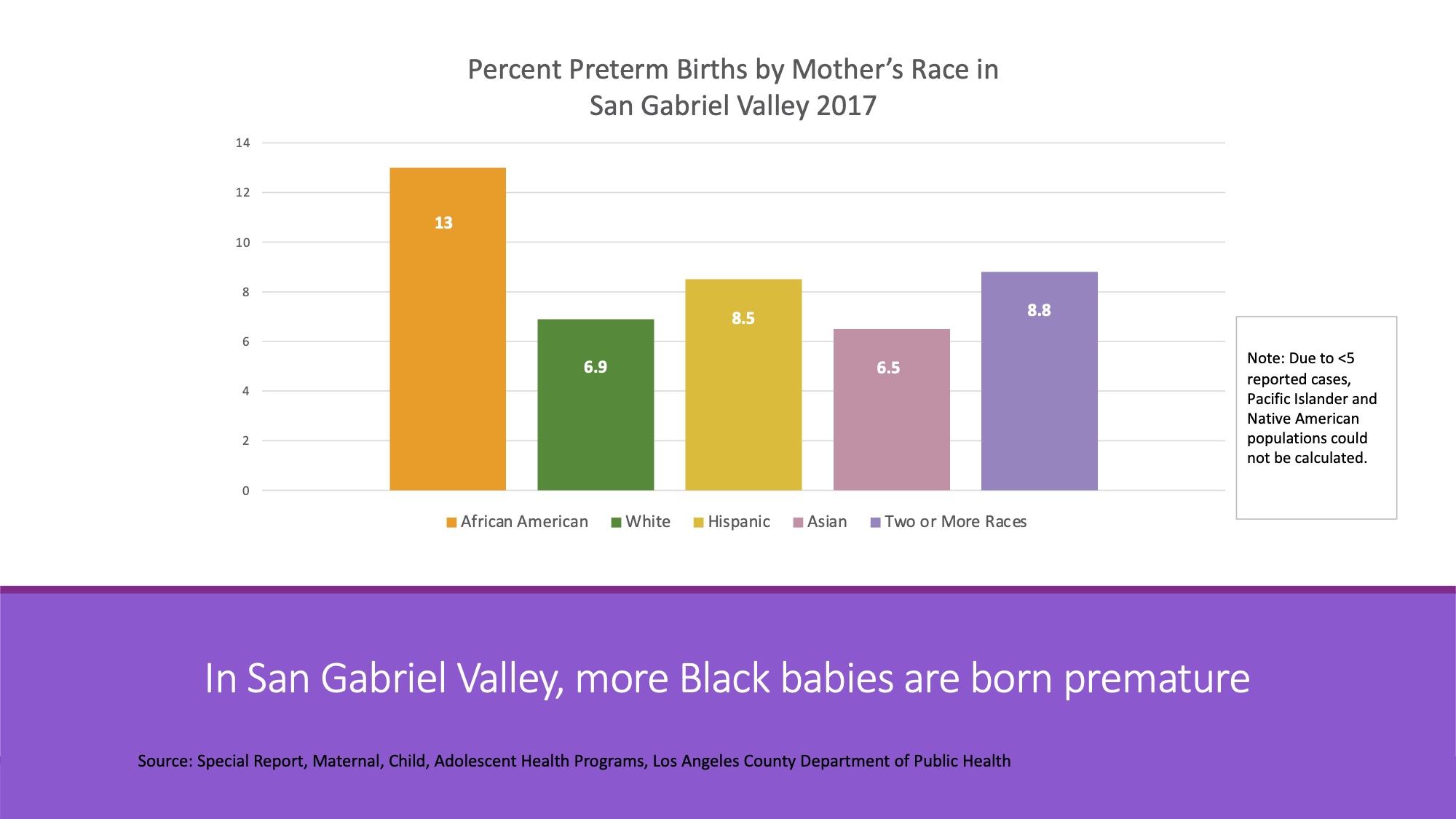